My most recent reverse engineering project has been to learn more about the internals of the indie strategy game FTL: Faster Than Light. 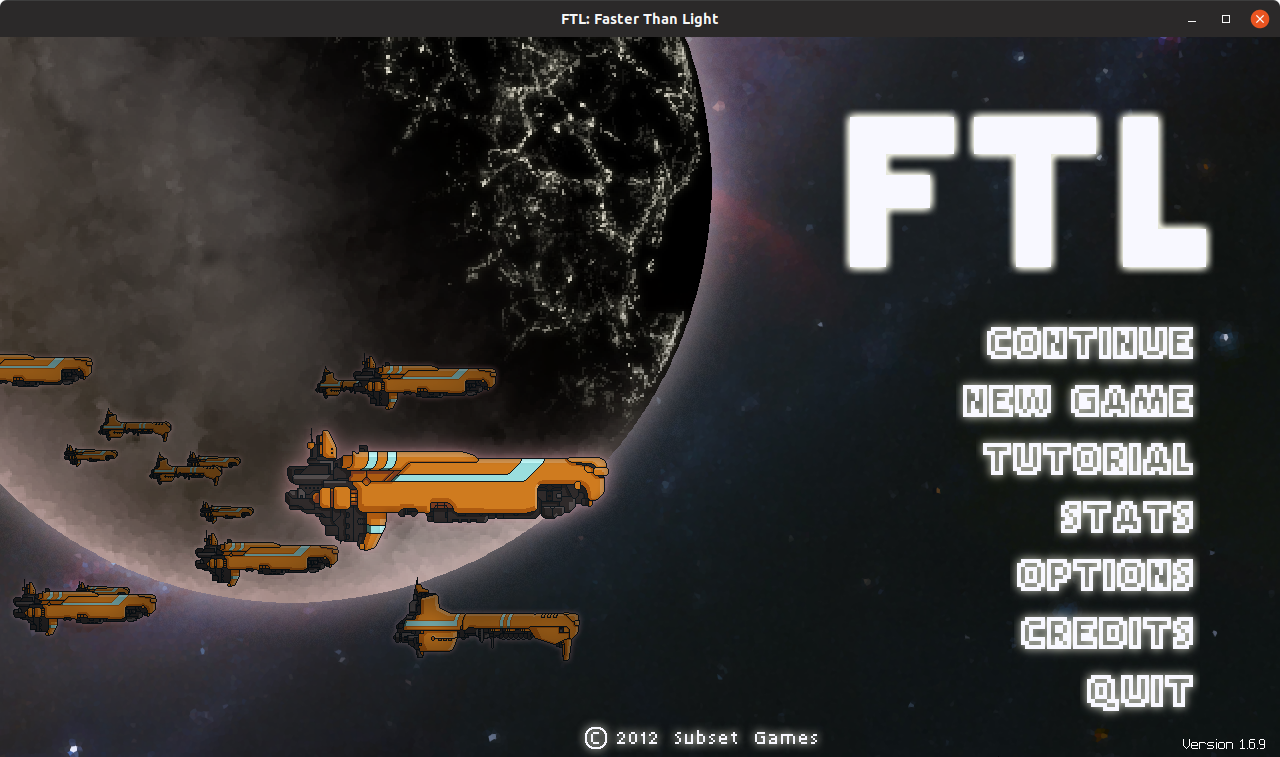 FTL: Faster THan Light is a 2012 rouge-like strategy game in a science fiction setting. You command a crew of a ship tasked with outrunning a rebel military fleet and delivering a warning message to headquarters on the other side of the galaxy. Your movement between the stars is facilitated by the FTL drive, a science fiction device that allows faster than light travel.

The game plays like an RPG and a management sim with a combination of combat, decision making, and resource management. It’s an inexpensive indie title that is worth giving a try if you’re into strategy games.

It’s also brutally hard. It might be one of the hardest games I have ever played. This is why I wanted to do some RE on the game to try to cheat a little and finally see the ending.

The game has four resources: scrap metal, fuel, missiles, and drones. Scrap metal is the currency in the game. You get this from winning space skimishes, exploring abandoned space stations, and making deals with space pirates and shopkeepers. Scrap metal lets you buy new weapons, upgrade to your ship, and hire new crew members. Fuel powers your FTL engine and lets you make the jumps. Running out of fuel is generally a pretty bad situation since you’ll be stuck as the enemy fleet approaches. Missiles are ammo for weapons systems that ignore shilds and have potenial to do more damange than conventional lasers. Drones are an interesting game mechanic that can automatically fight alongside of you, perform repair duties, etc.

If you want to get right to the cheat engine I built, look at the project on GitHub: https://github.com/austinkeeley/ftl-cheat. It lets you max out your resources (see the screenshot) and it makes the game slightly more winnable. 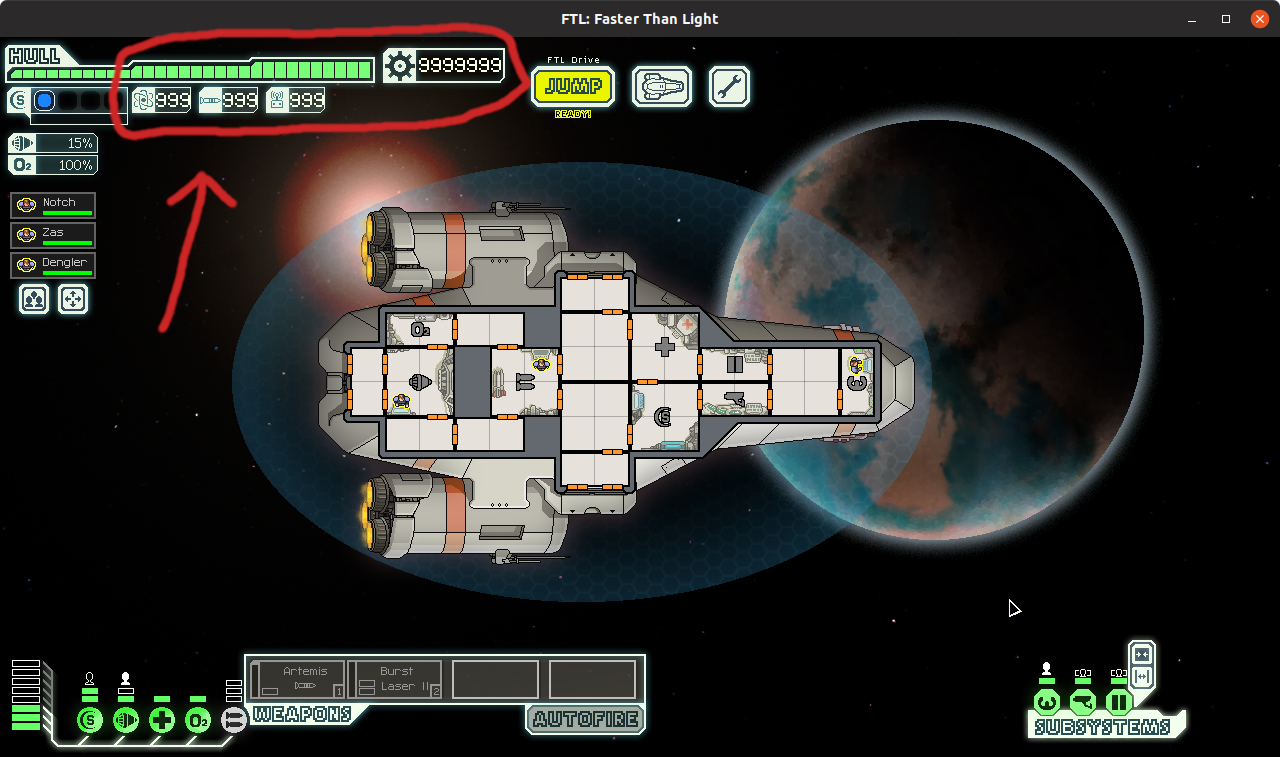 I’m using the Linux version purchased from Steam. Steam drops the game in the steam/steam/steamapps/common/FTL Faster Than Light/ directory. In this directory, you see the game launcher bash script FTL which just calls another script, data/FTL. This script checks your computer’s architecture and either launches the FTL.x86 or FTL.amd64 version.

There are no other shared objects and ldd just tells me that nothing else is dynamically linked in other than system libraries so we can assume that all the game’s code is in these binaries.

There’s also file called ftl.dat which I’m going to assume contains all the game’s data (graphics, music, story text and diaglogue, etc.). I’ll make a mental note to look for the code that loads this when the game initializes.

Digging into the Binary

I’m going to use the FTL.amd64 version. The first thing to notice is that the binary drumps a bunch of text to the terminal if you run it directly instead of through Steam.

That should give us a good idea of where to go after the entry point. There are a lot of strings in the binary that say things like:

Doing a little research, I discovered that is a debug string left by a software developer Andrew Church who ported the game to the iPad. I’m going to assume he also worked on the Linux port since the game uses an open source library he wrote, the System Interface Library for games (SIL). Having some of the source code is goign to make reversing the rest of the game easier.

As far as those strings dumped to the console, we can see the last one printed in the function at 0x00411ab0. We’ll call this one ftl_init. If we trace the call to this far enough, we can find the main function at 0x0040f390.

If I had to make a guess, I’d assume that there’s a data structure representing the game state (e.g. the crew, my ship’s name and health, the upgrades, etc.) and I can probably dump my memory and find it.

Let’s start with doing RE to determine how fuel works. This is easy because it decrements by one each time we do a FTL jump in the game.

I used memscan to find where my fuel variable is and then set a gdb watch to break when it changes so I could get a backtrace. Not surprisingly, it’s in the heap.

Here we can see the fuel being decremented by one in the instruction sub DWORD PTR [rdi+0x700], 0x1. I repeated the same steps to find functions that change the other resources (scrap metal, missiles, drones).

Most of those functions use a pointer to a game structure that holds these values. Scrap and fuel are direct members of this structure while missiles and drones are a little trickier to interpret.

Missiles use an indirect reference using a pointer to another data structure and an offset therein. The drone count is tracked in two places. If you currently don’t have a drone system installed, it’s simply an offset in the game data structure. If you do have the drone system installed, it’s an indirect reference using another structure. The game tracks which one to use with another memory address drone_system_installed which is -1 if no system is installed.

There is a global pointer to the game data structure at 0x8e3500. I found this by just scaning the memory for the address in the heap that I was seeing passed into the functions.

Now that I have the data structure figured out and a pointer to it in memory, I can start to figure out a good way to make changes to the running applications. I was originally going to write a C program that used ptrace to attach and modify the structure, but I took a shortcut and wrote a gdb script.

Gdb has a --command flag which lets you pass in a text file that contains gdb commands. It’s not quite a full featured scripting language, but it’s pretty close. Here’s my gdb script for giving me 9999999 scrap and 999 each of fuel, drones, and missiles.

If I combine that with the -p option to attach to a running process using it’s PID, I can attach, run the script that modifies the game data structure, and detach. I wrapped the whole thing in a bash script that makes it even easier.

I removed the lines that gdb dumps on the screen so you can see that it’s attaching, running my script and detaching. After running this, I get far more resources than I can possibly use in a single game. While this should make the game easy, I still had trouble beating the final boss, even with a fully maxed out ship.

FTL: Faster Than Light is a really fun game and I encourage anyone who likes strategy and rogue-like games to purchase it and support the independent developers.